Though the sun shone hard and hot, we are shielded from it's most burning rays by the smoke from two fires. One, the Tatoosh fire, has been burning for several weeks across the US border less than 3 miles away. The other, apperently, is a new fire in Manning Park, an hour west of here. We are at Keremeos BC, a small, close knit community which lies in the mid-south of the province.
We've been invited to a high-school reunion. It has actually come together through the impromptu organization of one of the students who's come out from Toronto for vacation. It's a casual BBQ - gathering, taking place in the riverbed of the Similkameen River at the 'red bridge'. In Keremeos the red bridge is a landmark - a distinctive monument which attracts people all year long. Some come to marvel it's asthetic or artistic appeal while others come to swim under it and jump off it - something which some folks would like to put a stop to. In recent years, the bridge sustained damage when the river was full of ice - floes, so the bridge has had a make over. 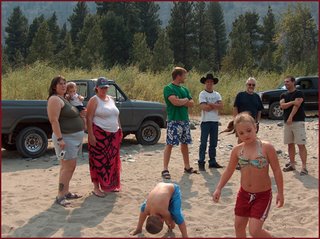 All afternoon there is a small core group of people, a few come, a few leave. There are small conversations joined into off and on. The kids play in a small pool that has been sectioned off from the river. A husky type dog, full of tension, plays for hours with the kids, amusing them with its' continual chasing of anything they can find to throw out in the water.

Miles was not sure if he needed to come to this reunion. It is his busiest time, with school upcoming, and with several other obligations this weekend to eat up his time he had wavered several times, testing me to see if I would make the decision for him. He wanted to come, though I know he was nervous, and in the end, with my encouragement too, we came.

It seemed two hours slipped by. I watched from the perimeter as one by one, he greeted former students and teachers. I watched as his face lit up and he relaxed. I watched as students eagerly shared their stories of their adventures in the lives they led since that time that Miles had a hand in shaping them and providing tools to use in that time. I watched as with wonder, he realized that he had made a difference in their lives. He'd made an investment.

And later, (misty eyed - don't tell him I told you he was) we drove home and as we discussed it, realized we lost 3 hours of 'work time' but could never really estimate the value of this precious time he shared with these people.

PROVERBS 27:9
Perfume and incence bring joy to the heart;
and the pleasantness of one's friend springs from his earnest counsel. 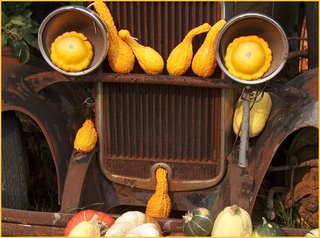 On the way home, we took time out to snap pictures of the squash displays at the fruit stands - hey we already lost so much time, why not? 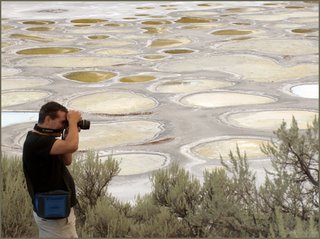 And we also stopped at Spotted Lake - its only five minutes from home. This is a way unique place to visit. There is also some great information about spotted lake which you can read HERE

BARB'S HANDY TIP # 69
Clean your Silver for Sunday Dinner
You can make your own homemade silver cleaner easily. Make a paste of 1/4 cup cornstarch with 1/2 cup water and then apply it with a damp towel. Let dry and then wipe with a clean cloth.
Posted by Being Mrs Miles at Sunday, September 03, 2006