Ha, I have SO MUCH to blog that I think I will only blog one little thing. :|

Osoyoos has a large population of Portuguese people and we used to buy the most delicious Portuguese buns from a magazine shop on main street. That's right - a magazine shop! The buns were baked in Vancouver (I was told) and they would get trucked in to various locations around the valley each Saturday.

It was always a good idea to 'reserve' a few dozen because if you didn't they were GONE within an hour of arrival. And this was hundreds of buns! They were so good the tourists and locals alike would flock to the store to purchase them. On the rare occasion the buns were not sold out the owners would store them in the freezer and you could buy them that way as well.

Then, the magazine shop suffered a fire, and we could no longer get the buns. Oh woe was me (and a lot of other people as well) - until I found out we could buy them from an East Indian Market this side of Oliver... then eventually even they stopped getting them. Sigh sigh, what to do - by now I was totally addicted to them!

WHAT MADE them so special?

A light as a feather bun with an angel food cake soft inside and a chewy, nutty roasty flavoured crust (which when toasted makes a crackly, satisfyingly crunchy toast) Sometimes they arrived all coated in flour which had a roasted flavour and made them 'shish' against each other. And the aroma? Indescribable!

So, I decided the other day to look for a recipe on the internet. It was not easy to track down a genuine one but after much searching I found one which brought me very close to the original ones we used to buy. 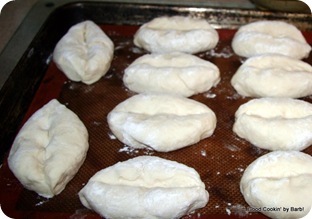 We used to buy ones shaped like this - like little footballs - and sometimes they came round with the indent down the middle. Mine are on the small size, the ones we used to get were about twice as big. 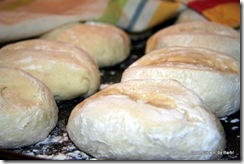 Here they are ready to pop into the oven after rising! 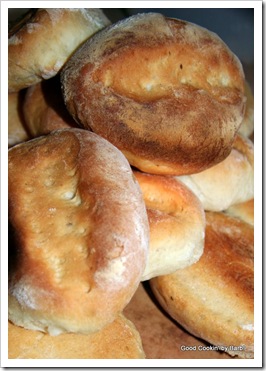 And here they are in their full glory! Light as a feather, nicely browned, and the smell........

Now I will not have to long for them again. My Mr. has made me promise NOT to bake them too often - he cannot resist!

Ok, so I am sort of laughing here because I KNOW my friend Betty will be by at some time and is surely going to be drooling over MY post. So, its sort of a revenge thing - travel on over to Betty's blog and you will see what I mean - (SHE posted a recipe on hers that looks DE-LISH!) and I made the mistake of visiting her ON AN EMPTY TUMMY. Aarrrrghhh - I had a binge after that haha! Click on the preview below to visit Betty. 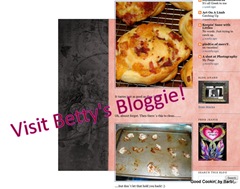