PAINTING THE TOWN - NANAIMO, THAT IS... 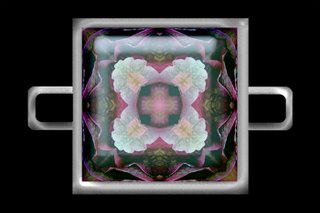 Hello from the road, everyone! Really, I AM missing you all, but am enjoying our vacation as well. This entry finds us in Nanaimo, BC on Vancouver Island. This is truly a gem of BC - Canada even, with lush greenery, (we love the arbutus trees!) fresh ocean breezes and a unique feel of it's own. 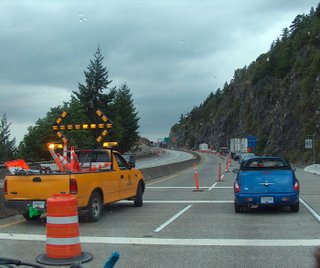 HEADING TO THE FERRY

We left our folks place in Abbotsford on friday, leaving early, but not TOO early - so we avoided the rush traffic. Still, it was pretty busy and the weather was moist. There were a few hectic moments toward the terminal where construction was happening on the roads, with little notice of lane closures. Its fairly tricky and you have to pay attention when you get to the terminal, so that you end up in the correct lane for the right ferry. Don't want to be heading off to some small island or anything!

We drove directly to our daughter's store in the Woodgrove mall and got parked. We took our computers in with us as we don't trust to leave them in the van. We set the alarms off in the Bay, and had to figure out what was causing that with the security gaurd. He was very helpful and he demagnetized our packs after we took our computers out. He told us that often it will be a chip that's actually been sewn into clothing or tucked in a book or something. Have you ever had an incident with a store security system?

Well...when we arrived at Dezrae's store we walked into chaos. She is in the throes of redecorating her store! There was paint EVERYWHERE and 'lil helpers working away. We rolled up our sleeves and pitched in! 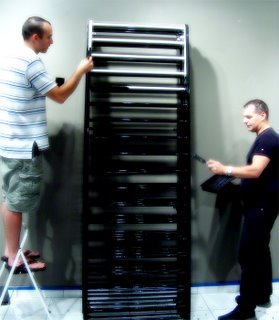 MILES AND JOE TOUCH UP THE RACKS

Everything was happening in a sorta freestyle arrangement with people coming and going and not really a lot of orchestration. A lot of black paint was being tracked throughout the store and out into the hallways as well. 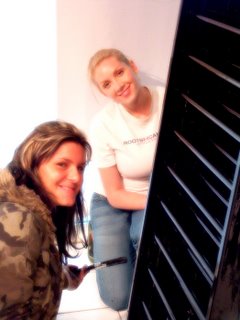 We worked until early evening and then headed home to enjoy a tasty dinner together (we cooked, he he!) It was up and at it first thing this morning in order to give a hand at the store again. It was several hours of scraping the black, glossy, blobby paint off the floor. Helpers came and went...more went than came... We finally wrapped it up in the mid-afternoon when we took Dezrae to Canadian Tire to buy bike. We stuck it in the trunk and headed home for a 15 minute break, grabbing Miles camera. We spent the afternoon doing a photo-shoot of some models for a poster for Dezrae's store. By the time we were finished it was after 6 so we drove home, threw on our helmets and went for an hour long bike ride on the paved bike path. Dezrae got a good lashing by a blackberry bush on the trip back which left her scratched up. 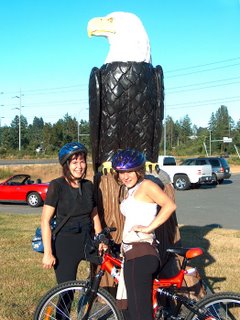 ME AND DEZ WITH HER NEW BIKE

I will keep you posted as we head off to the U.S. of A tomorrow! Hello to all of you and I hope to get onto hello one of these times - can't do it here :(

Use Your Head (rest)

After struggling the first nights to locate my pajama's within the recesses of my duffelbag, I discovered that the very best place to keep one's jammies on vacation is to tuck them right into your pillowcase! Do you have a camping tip you would like to share?